Pandora's Box and other stories!

Saturday 13th May was another fascinating day, I spent most of it at the Arcola Theatre in Dalston where Ade Solanke’s latest play ‘Pandora’s Box’ was on show alongside a day of workshops and talks with invited speakers such as Diane Abbott MP, Ron Belgrave (former head of Community Safety under two Mayors), Olu Alake (President 100Black Men Of London) etc. It was a fascinating day which Proud to be African Clothing was pleased to be invited as it covered so many of the themes that resonate in this clothing line, hence the Born in the UK Made in Nigeria T shirt picture which as you’ll see kind of resonates.

The play revolves around a family that is split between the London and Nigeria and takes place mostly in the living room of their house on Lagos. Pandora is the mother of Toyin and Ronke. The latter remaining in Nigeria while Pandora and her husband went to England to study. Toyin and Pandora have come to visit Nigeria for the first time since then with her friend Bev and 15 year old son Timi in tow.

Without spoiling the plot Timi is a typical inner London youth over indulged by his mother who is sinking deeper and deeper into London’s gang life, the family has decided he is to attend a prestigious boarding school in Nigeria in order to ‘sort him out’, however Toyin is having last minute cold feet. While big sister Ronke harbours a deep grudge against both mother Pandora and junior sister for abandoning her, Pandora feels guilty for abandoning her and for not coming back with her qualifications.

I really can’t say much more without spoiling the plot but it is an excellently written and brilliantly acted play that covers all the thorny issues of identity, parenthood and culture from all the angles, from a mother’s anguish, a child’s bitterness and sense of abandonment, the agonising choices a parent faces in trying to do the right thing. From a personal (and business) perspective it neatly encapsulates the idea behind my Born in the UK, Made in Africa/ Born in the UK, Made in Nigeria brand as I also left the UK and went to boarding school in Nigeria, although I look back upon it now as an extremely positive and life changing (in fact life forming) experience, a particular scene between Timi and Tope his friend from London who had made the transition to Nigerian school boy and was making a marked improvement reminded me of how difficult it was at the time.

All in all a brilliant play that addresses a pertinent issue not just of education and the role of culture and identity but of parenthood and that bad choices can be made with the best of intentions. 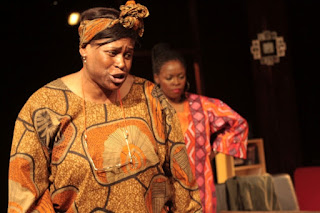 The afternoon matinee was preceded by a panel discussion headlined by Olu Alake and Ron Belgrave, with support and contributions from the Nigerian Youth Network, Yemisi Sanusi of International Day of African Childhood and its Youth (IDAY UK), Anne Olayinka of Youth against Crime not crime against Youth (YACnCAY), Black History Studies and Nigerian Women in Diaspora Leadership Forum.
Following the matinee performance there was another panel discussion with Diane Abbot MP, Olu Alake, Ron Belgrave, Ade Solanke and Waryla Abrahams, the lady whose dilemma actually inspired the play. This remarkable lady who is a teacher struggled with these issues with her son, who was unfortunately on a downward spiral yet today after his stint schooling back home he is an undergraduate studying Business Entrepreneurship. 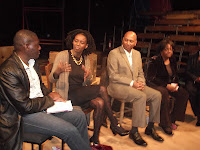 The panels various stories and experiences neatly summed up many of the plays issues with Diane Abbott sharing her sons experience of 6th Form in Ghana, with the experiences of having to fend for himself and Olu describing his experiences of studying back in Nigeria and stating that if he had the chance he would send every schoolchild back to experience what life is like living not as a ‘minority’.
There are so many choice lines in the play but I would say the most thought provoking one was by the character Bev when she said: “What do you see out of that window? People, right? Just people. Because there are no ‘Black’ people in Africa. Let him experience that for a change.” 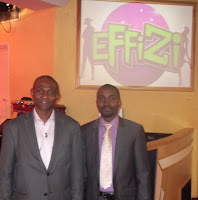 Also that Saturday evening saw the launch of a new talk show Effizi which celebrates achievers of Nigerian heritage, from all walks of life and fields of endeavour. Special guest for this show was Dr. Kunle Onabolu a Civil Engineering graduate, where he obtaining an MSc and PhD in Concrete Structures at the age of 28 from Imperial College London. From being the technical business manager at Redland Technologies, a FTSE 100 company, where he developed new materials formulation he was head of process development at Lafarge UK until 2002, when he left to form his own company KAO Project Solutions Ltd. KAO is an innovative company that provides consultancy and project management services in transportation infrastructure. In 1998, Dr. Onabolu founded a charity African Child Trust and is founding president of the Engineering Forum of Nigerians (EFN).

On Wednesday 16th May LERECA is holding their ‘Apero’ (it’s all very Francophone!!) at 7pm at Cotton Restaurant, 70 Exmouth Market EC1, this event is meant to bring together peoples from all over the African and Caribbean diaspora (Anglophone, Francophone, Lusophone) to network for business and leisure, it’s a nice chilled out way to meet likeminded people in a great venue.

Friday 18th May see’s the Ghana Golden Opportunities 2012 at Grange City Hotel, 8-14 Coopers Row, EC3N 2BQ , the theme is ‘Investment & Business Opportunities in Ghana’ and will consiust of presentations by Tullow Oil Plc,  UK Trade & Investment (UKTI), Ghana High Commission UK & many more Q & A and Networking. The aim is to provide a platform for Ghanaian Diaspora Entrepreneurs and
Professionals to learn more about the investment & business opportunities available for them in Ghana.

On Saturday 19th May the London Business School Africa Club will hold the their Africa Day at London Business School, NW1 4SA. The theme is ‘Africa, Taking Ownership: Successes & Challenges’. The conference will explore and celebrate the many ways in which Africans are taking ownership for their continent’s destiny, driving reforms, building capacity and propelling growth from within.

The Womenfor Africa Awards UK will also hold that day at 5pm at The Great Hall, Kensington Town Hall, Homton Street, London, W8 7NX, the awards gala promises to be an evening filled with entertainment in the form of music and comedy, networking and the honouring of some of the most outstanding African women in UK.

On Sunday 20th Rita Ray and Max Reinhardt of ‘The Shrine’ return for another Mwalimu Express at Rich Mix featuring  awesome music from around the continent. Come join in the stupendous storytelling sessions, Screen Station films and far out family arts workshops.

On Wednesday 23rd May a brand new play by an African female writer opens at the Soho Theatre. ‘Egusi Soup’ by Janice Okoh, is a fast, furious and funny intergenerational and cross cultural family comedy about the Anyia’s as they pack their suitcases to head home to Lagos for a memorial service to honour the lat Mr Anyia. There’s mothers fathers, pastors and of course Egusi Soup!

The writer Janice Okoh won the Bruntwood Prize and was short listed for the Verity Bargate Award ad the Alfred Fagon Award and wrote the play to honour her late father and try and communicate the different attitudes one has to death and life and to write a play that showed the humorous side of the diaspora experience. The play stars award winning actress Ellen Thomas (Eastenders), early bird tickets (23-25 May) are £10.00, 26 May – 9 June £12.50 (conc.’s £10.00), 6-9 June £15.00 (conc.’s (£12.50)

Bola Agbaje’s play ‘Belong’ is still showing at Jerwood Theatre Upstairs, the Royal Court Theatre, Sloane Square, SW1W 8AS till 26th May and then onto  The Bussey Building, 133 Rye Lane, London SE15 4ST from 31st May to 26th June

The sun seems to be back, here’s to an African summer!!
Posted by Proud To Be African Clothing at 02:08